An Introduction to Aussie Reds

Aussie Reds combine an extensive infusion of Scandinavian Red genetics with other Australian Red breeds such as Ayrshire, Dairy or Milking Shorthorn, Illawarra, or Red and White Holstein.

The Aussie Reds offer a commercial animal that can meet guidelines which require quality of milk for the present day market payments. Comprehensive data on sires from Scandinavia of heritable traits such as disease resistance, ease of calving, fertility etc., is also available. This information has only been seriously considered in other countries around the world quite recently, but the Scandinavian countries have had breeding values on these traits for many years.

A Progeny Test Scheme was introduced in 1992 in conjuction with Genetics Australia's AB Company, "Horizon'. Current ABV Proofs from these bulls have been very acceptable due to the strict selection criteria and farmer confidence in the system. Progeny test semen is being well utilized in Australia, particularly in the commercial sector of the dairy industry. The Australian Dairy Herd Improvement Scheme (ADHIS) provides Australian Breeding Values on these bulls and aligns Australia's ABV system with Interbull's International.

Behind the development of the breed is the Australian Red Breed Progeny Test Committee.

By blending the red genotypes and breeding Aussie Reds you can select for the benefits which these genetics add to your herd: 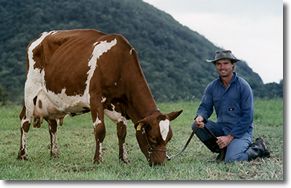